“Disclaimer: I received entry into the Fort 2 Base to review as part of being a BibRave Pro. Learn more about becoming a BibRave Pro (ambassador), and check out BibRave.com to review find and write race reviews!”

There were 2 races, the 10 nautical mile and 3 nautical mile. Point to point race, the 10NM started at Fort Sheridan and ended at Great Lakes Naval Base. They both started at the same time at different points.

Registration: This was available online or you could send in a form postmarked by August 1st. Participants could register at packet pick up if the race was not sold out. No race day registration. The 10 NM race started at $40 and topped off at $90. Military participants were given a discount. Included with registration was a gender specific, short sleeve tech shirt, a bib, finisher’s medal, and shuttle to the start.

Packet Pick Up/ Expo: There were multiple pick up options. There were 2 different running store options days before the race and you could get your stuff on race day at the starting line. Someone else could grab your bag, just need your bib number. No true expo.

I was in the midst of our crazy running weekend, and I wasn’t too excited about waking up super early, so fellow Pro Heather grabbed our packets at our hotel.

We all crashed together in the race hotel. It had shuttles to the start, packet pickup (yet I have yet to figure out how they knew you were staying at the hotel, if you didn’t contact them) a runner’s breakfast and late checkout. 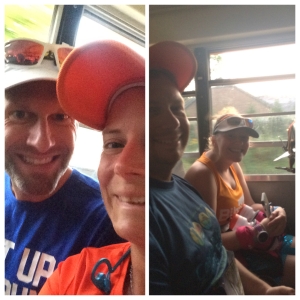 Pre-race: As mentioned this is a point to point race. Participants needed to grab a shuttle bus or ride to the start. There was parking at a local college to board the bus, and shuttle ran up until 6:15. The lot filled fast, and parking became limited. Once on the shuttle, it took about 30 minutes to travel to the Fort. Once arrived a the starting area, port-o-potties and gear check were available. Runners were told they could not have go pros and no photography was allowed.

As the race neared, pacers lined up behind the starting line, all the way up to 14:00 min/mile. Then the National Anthem was sung live after a few announcements.

Heather, Josh and I met up with fellow pro’s Tom and Kati for a pre-race picture. We had a few minutes to mill about the parking area near the start. IT was a laid back start. 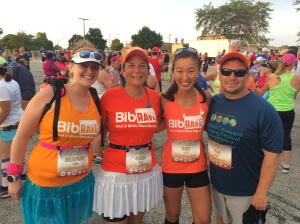 Race/Course: From the fort to the base, connecting via the Green Bay trail.

I enjoyed the flat course, but it was great to have the hill near the end, to give the leg muscles a change. It was also super cool to have encouraging words and pacers on Hero Hill. There was a Chief behind me and the pacers were encouraging him to keep moving forward as he walked the hill, then they went into a military chant. I also got to run most of the middle section with fellow pro, Tom (with so many pro’s it was nice to get to know him more.) Also I don’t live in Chicago, but I have done 3 different races, it was very refreshing to not have to run the Lake Front Path or through McCormick.

On a note about the security on the Naval base, it was fine and I understand it’s an active base, I did feel like “Big Brother” was watching.

It was also cloudy and there was rain nearby, but being a point to point race and the way the rain moved through, I never got rained on. However depending where you were on the course, some did get wet.

Also I was so confused, I thought the entire time I was running north to south, but when we saw Lake Michigan for the first time, I said “The Lake is on the wrong side” LOL We ran south to north, no wonder… I am someone who likes to know where they are, or what direction I am heading. 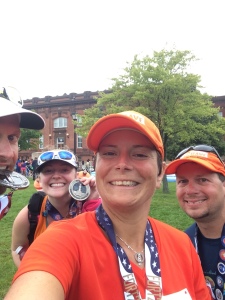 Finish / Post Race: The finish was easy to find, with finishers chute, clock and archway. After you crossed the line, runners had medals placed around their neck by active military personnel. The medal had the Fort on one side and the base on the other. Bottle of water and/or Sobe Life water in a bottle was handed out. The food “buffet” was set up under a tent, including a banana, pita chips, granola bars (4 different kinds) popcorn, and cracker jacks. There was a lot of land for the finishers to hang out. Power bar had samples, a local company had lemonade. There was a DJ and merchandise tents. You could exchange your shirt for a different size.  Some awards were given out.  It was also very easy to watch finishers. I didn’t notice any port-o-potties. 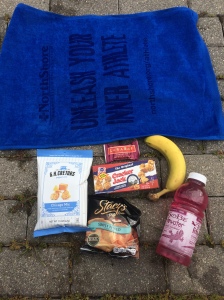 Then you had to catch a shuttle back to your car, from a map it looked like you could walk, but in reality, no idea how you would get there. The line to catch the shuttle was long, but moved quickly.

It was a nice finish, with a lot of food. However it was conflicting as no photos were to be taken, yet there was a sign posted about all the social media outlets for the race. Not sure if this was to tell runners to check out the twitter, instagram or facebook pages or post photos to those pages? Also with so many food options, it would have been nice to have a bag, or something to put everything in. Ok so maybe I don’t take one of each thing, however try to hold a banana and Cracker Jack box and open your bottle of water.

Overall: This is a nice race, new scenery to run in the Chicago area. I would make sure to register early, to pay an affordable price. Also fun to end at the naval base.

Personal: This was the last race of the weekend for me. I did not run a great time, around a 2:05. I had also forgot my watch, and for a while I wasn’t sure if the mile markers were in actual miles or nautical miles. Either way, I finished and enjoyed the course.

At one point during the race I saw Beth Salinger, who was the RD at Hospital Hill, so I knew I wouldn’t have any problems. However the weird sizing on my shirt made sense, it was the same too big for me shirt I received in Kansas City, lol

I was also happy to meet up with some new pros and hang out with Heather again. She made our trip possible, so we could do the 3 races for the weekend. Staying at the hotel was the best thing we did, it had so many great things for runners.

Check out bibrave.com for more reviews.

See what fellow pros Heather and Tom had to say. 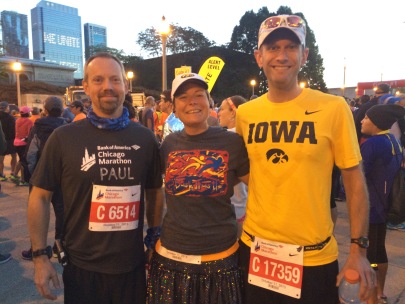 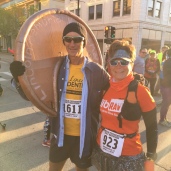 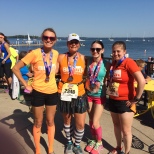 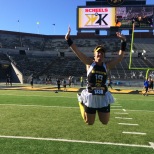 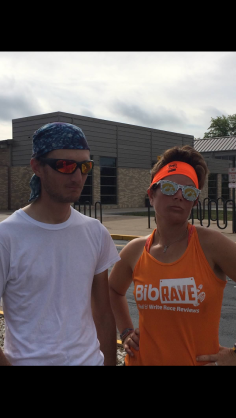 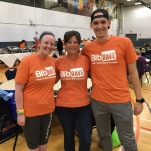 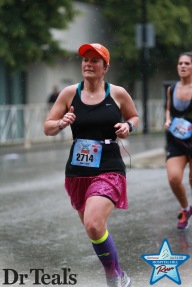 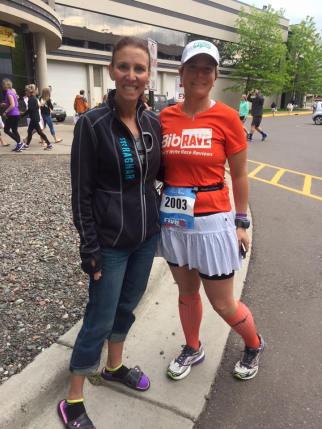 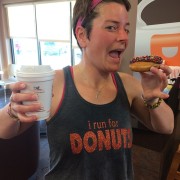 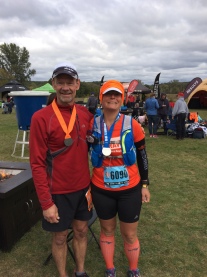 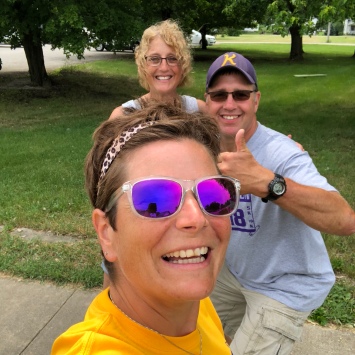 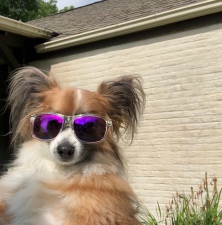 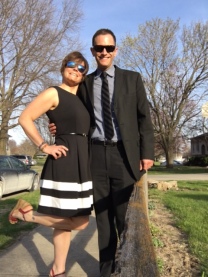