“Disclaimer: I received entry into the Hot Dash 10 Miler to review as part of being a BibRave Pro. Learn more about becoming a BibRave Pro (ambassador), and check out BibRave.com to review find and write race reviews!”

Hey – Yo! I am back in the swing of #alltheraces. That’s right, I was ready to run a 10 mile race just 6 days after my last race, a full marathon.

This trip would require a 5 hour drive, piece of cake. I was lucky enough to be joined by my husband, Josh.  He wasn’t sure if he was going to be able to make the race due to work, but things changed and he was able to get a bib at the last minute, due to the great race management.

We took off Friday afternoon. I had made arrangements for someone else to grab my packet, and Josh had to pick his up race day to sign a wavier (more on packet pick later) So we weren’t in a rush. We did have dinner plans with Kate…remember my number one cheerleader, who made the One City trip.

Despite the strangest weather conditions on the drive, from snow to clear roads, to slush and sunny skies. We made it to Borders, pasta restaurant only to have to wait another hour to eat. So we toured the neighboring stores, and waited. It just so happened the running store where packet pick up was held was across the street, but we missed it by 30 minutes. We did check out the deals at a thrift store.

Border’s was a happening place, but casual too. We dined on home made pasta and plates of bread. Ok, so this is only a 10 mile race, and all the carb-o-loading isn’t super necessary, but hey it was delicious!! Even had tomatoes and cheese on my noodles 🙂 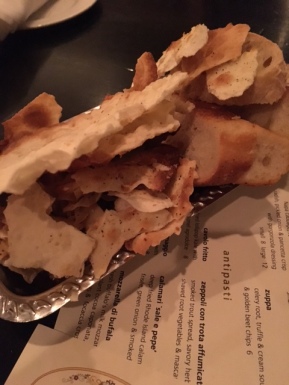 Fellow Bibrave Pro, Gina was running this race too. I had yet to meet her in person. She agreed to pick us up and take us to the race. She pulled up on time, even though the roads were a little slippery.

It was nice getting to chat with her, where I learned she is a dental hygenist…and I may have told her, that is my least favorite person…hope she didn’t take offense. She is a very nice, happy person.

Registration: Available online, prices increases as race day approached. Participants need to register quick as the 5k sold out, and the 10 miler only had a few spots remaining. Included with registration was a bib with timing chip, a Storm Creek unisex 1/4 zip pullover, post race hot dish, post race beer.

That quarter zip is great! 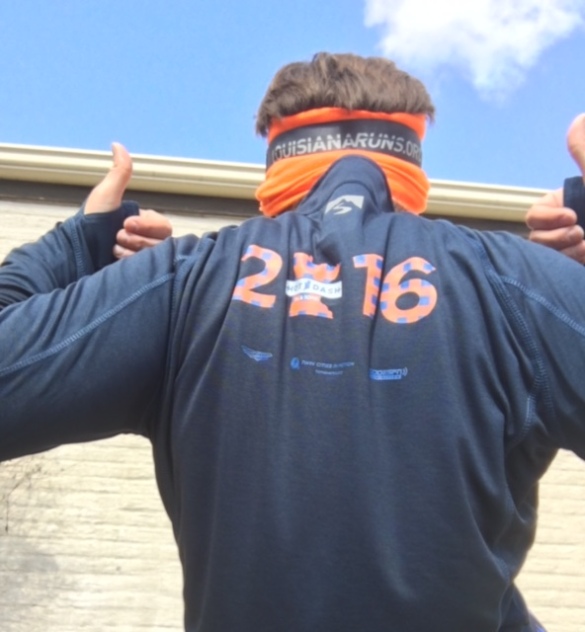 Expo/Packet pick up: There was no expo for the race. Packet pick up was held Thursday and Friday before the race at the Fleet Feet Marathon Sports store. Someone else could grab your packet. There was also race day packet pick up at the “registration” table near the race start. The running store was in a small neighborhood in MPLS, not near the race location, there was on street parking.

Pre-Race: Parking was close, but encouraged to use the ramp nearby for $10 (prepay $12) However the wait to get into the ramp took about a half hour, come early to get parked and to the start on time. The starting corrals were self seeding by pace. Lots of port-a-potties.

Ok so the whole parking thing was not fun. I get anxious and would rather sit in the car, parked and wait for the race. Josh got out of the car while we were sitting in traffic and walked to the start to make sure he could get his bib in time. We made it into the parking ramp, and there were so many empty spots, it was just a slow process getting in. Gina even prepaid to make sure we wouldn’t have problems. I guess the best thing was we didn’t have to wait out side long for the race to start.

It was cold, but we were ready to go! Remember a while back I wrote about running in costume, well you can see which tights I chose to wear. 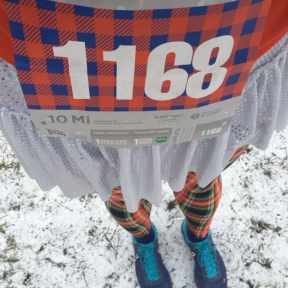 Race/Course: The race course was all on paved surfaces, running an out and back style course.

My race: As I mentioned above, I was 6 days from a marathon, so I didn’t have grand expectations for my race. However I was going to do my best. I told Josh, Gina, and Kate an estimated finishing time of 1:45.

I started in the 10:30/11:00 pace, and just kept moving. I was feeling well, making sure to watch my footing, as the potholes were plenty. I was near the turn around loop before mile 4, and I saw Josh off in the distance already heading back. I made it to mile 4 and made the turn, a lady made some noises and arm movements. I was really in the zone, didn’t pay much attention. OH DEER!!!! That is what she was telling me, there was a deer stuck behind the fence in some parking area of an office building. It came out the opening and was scared of all the runners, but it frightened me as well. There was also another deer darting up off the side of the road ahead…whoa.

I was alert now, and kept trucking along, I was noticing my pace had moved to sub 10 minutes, and I really felt good. I took a sip of water at the second stop.

I met up with the 1:40 pacer at around mile 6. I thought I better stick with the group for at least 2 miles, or I am going to burn out. This worked, there were times I started to lag behind, but they were always in my sight. There were still some icy spots on the route too.

Around mile 7, I had to detour around these 2 women, who had been walking and running the course. Their running pace was fast. However when they stopped this time, in the middle of the course to take a selfie, I knew they were now my new goal, I had to beat them. At this point in the course was the steepest incline, a bridge crossing.

I stuck with the pace group until mile 8 when they stopped at the last water stop, bathroom. I kept pushing, and never looked back (not sure what happened to the run/walk selfie ladies). Mile 9 was near 9:30 and since my watch had been hitting the miles before  the mile markers, mile 10 was 9:10.

I fought the last .2 (according to my watch) to stay balanced on the bricks, it was similar to cobblestone. I crossed the finish in 1:38:17. WAHOOO!!! My PR is near 1:37. I felt great!!! In fact, Josh and Gina missed me finish, I was just too fast. Ok so I wasn’t as fast as those speed demons. (Maybe it’s the On Running shoes)

Post Race/Finish: Once you crossed the timing mat, marked with a clock and flags, you were handed a cool hot pad shaped medal. Then there was mini Clif bars, nut goodies, Old Dutch Chips, bananas and bottles of water. The actual post race party was a little walk across a bridge. Here there were outdoor fireplaces, photo booths, Finnegan’s beer and hot dish (redeemed with race bib tickets, ID’s were checked). The hot dish was piping hot and similar to a shepherds pie. The music was loud and the lumberjack costume contest was judged. I never noticed any awards. 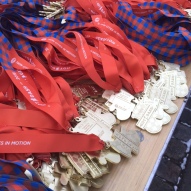 Ok, are you still reading? LOL

The post race party was a short walk across a bridge, not too far away. This is where we met up with Kate, she was taking us back to her place. You had to have an ID checked to get a beer, no ID, no beer. I forgot my ID, but I had a drink of Josh’s. The hot dish was really good, and I think I overheard there was a vegetarian option too. However after running the race and being sweaty, then having wet clothes, we were frozen. We tried to warm ourselves with the outdoor fireplaces.

We stayed around long enough to take some fun pictures in the photobooth, and some jump pictures. Even ran into a fellow Iowan, Carson, who had run the race.

We parted ways with Gina, and remembered I would be back in MPLS for the hot chocolate race, and would see her again. (Registration still open, code BibRaveMIN will get you a head wrap) She mentioned to Kate, she thought she looked familiar, she’s internet famous!!  Our next stop was the coffee shop across the road, we were sooo cold.

Overall: I ran this last year, and I feel like I enjoyed the race festivities more this year. The major headache is parking, but can be resolved by preparing to arrive early. It’s a challenging distance to run, and lots of fun. I would run this again.

If you ran, make sure to add your review to Bibrave.com

There was just one last thing to do. Kate claims that we have been to Mickey’s dining car for food, I kept telling her we had never been there. So, we made the maiden voyage.

Mickey’s is located near the Excel Center in St. Paul, but it just happens that the B1G Hockey tournament was happening there too. So the area was busy, but Mickey’s has it’s own little parking lot, and we found a spot.

What makes this place so special, in addition to the grease on the grill dating back to 1938, the actual building is an old rail car. That’s right, there is not a lot of room in the place, but it provides for a great atmosphere. It kinda reminded me of my Waffle House trip but with character.

The waitress shouted at us, and we shouted our order back to her. The grill cook was great and very chatty, even made fun of Josh’s Hawkeye hat and his request for no onions.

The food came, and we all wished we had ran 10 additional miles. I had a giant omelet and an order of hash browns, Josh had the same, Kate ordered a patty melt and a pancake for the table, LOL. IT WAS SO GOOD!! The omelet was so fluffy.  Ok, I am rambling….

We left the dining car, but for some reason it seems no trip to MPLS is complete without a trip to Sebastian Joe’s.  Mmmm ice cream! Ok, so we have eaten ourselves into a food coma, only to get in the car and travel 5 hours home.

We said our goodbyes to Kate, and I was sad as I had seen her the last 2 weekends, but I would be back in a month.

On the road again….we were watching the weather and some snow showers were moving through the route. We took our time and hit the Nike outlet at Medford. Last year I found some Chicago marathon gear for nothing, and this year was no different. I got a hat, socks (that were $25 at the expo) and a tech shirt for $15, DEALIO!!!

OMG, I am really just rambling on…we managed to wait out the weather, and the roads were clear for the remainder of the trip home. We both enjoyed the race and a great trip to MPLS. 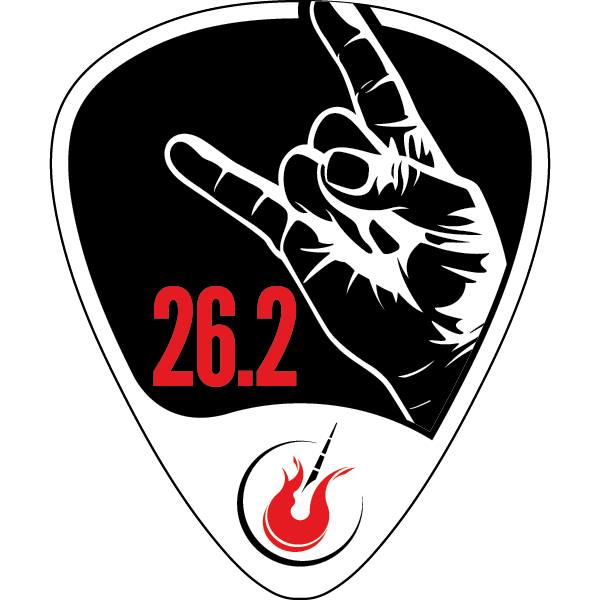 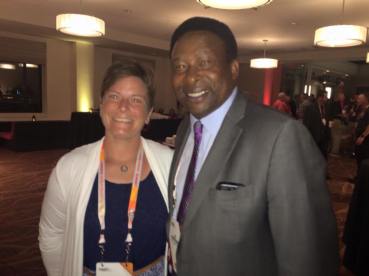 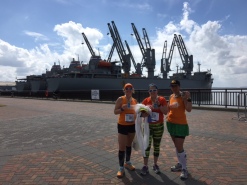 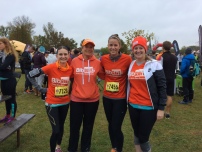 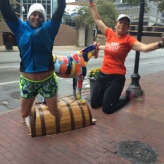 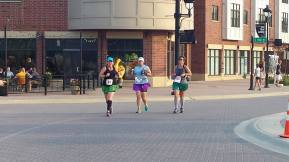 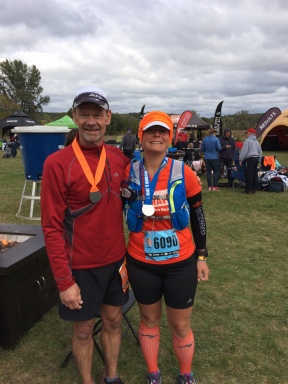 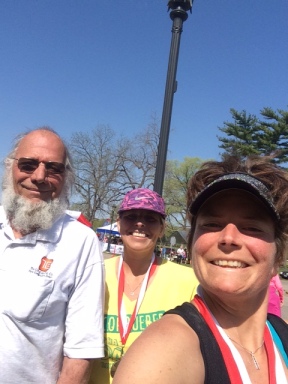 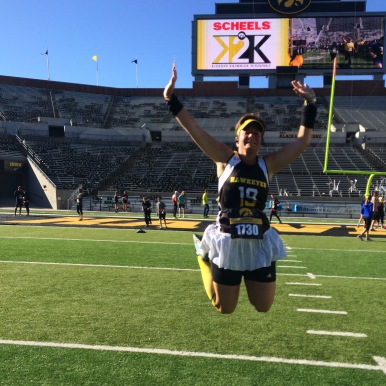