After a long break, it’s great to be back at a race again.

I have run this event before, but the 50k distance. I was actually registered for the 50k,  but due to injury I stepped down to try the 25k. I needed to get my race bib and things, so I took the short drive to Solon and arrived to the Timber Dome around. 7:15 AM. The race started at 8. It is a trail race around Lake MacBride.

I dropped off my clementines and cookies to the nice lady taking care of the food, and stepped up to get my bib. I was lucky number 178. I then proceeded to get my Orange Mud transition towel. This is such a great alternative to the traditional race shirt, plus I had my choice of four colors – orange, green, blue, and pink. Then I went to get the ankle timing chip. 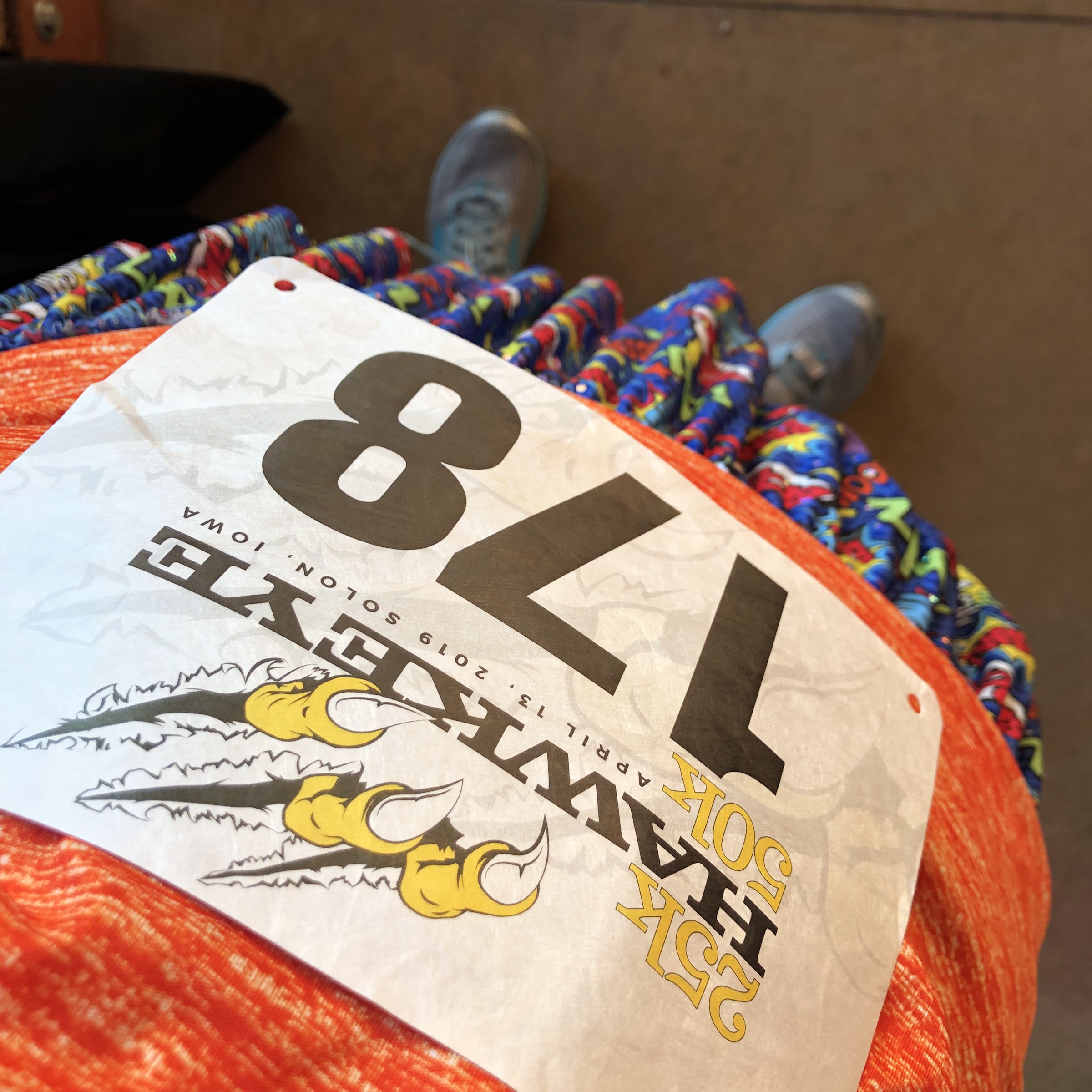 It was a good thing I double checked the distance I was registered for. I was still in the 50k category, eeek!! I thought I had it already taken care of. I talked to the race timer and he quickly took care of the switch, then said if I felt like going another lap I could still run the 50k. I love my local running community, it’s best to make sure we are all accounted for, and in the correct category.

I walked back to my car to get my pack on and things ready to go. I was wearing my new Orange Mud Gear Vest Pro for the first time – ON RACE DAY! I am a rebel, what can I say. PS – this is my 4th OM pack and they are the best, so I did not expect any surprises…but as a rule, nothing new on race day is a good one.

Ok, it was near time to get rolling. People started lining up. The 25k and 50k runners would go at the same time. (There was also a ruck happening, and they were already out on the course.) I was in the back. I just wanted to finish, I had 8 hours to go 15 ish miles. I knew the course would be tough for me once I crossed the spillway about halfway through, so I didn’t want to impede, just enjoy the day.

I don’t recall a National Anthem, there was a quick reminder to have your timing chip on your ankle…and then the pack moved forward.

I fell in with the runners. The first part of the trail is on crushed limestone. There are a few short climbs, but nothing steep. I did notice that people must have been using the trail in muddier or softer conditions as it was “rutted.”

Our first views of the Lake gave us a surprise as there was a collegiate rowing event taking place. This didn’t seem to bother the geese that called the place home.

The pack began to thin out and a man came up alongside me. His name was Rob. I recognized his name from cleaning up the flags at last year’s event and he recognized my name from social media #angieproblems. This is why trail and/or ultra running is superior…meeting people and chit chatting as you go. We kept each other company for a few miles, then he stepped away to use the facilities.

I went back to listening to my audio book and just taking in the scenery. It was a gorgeous day. 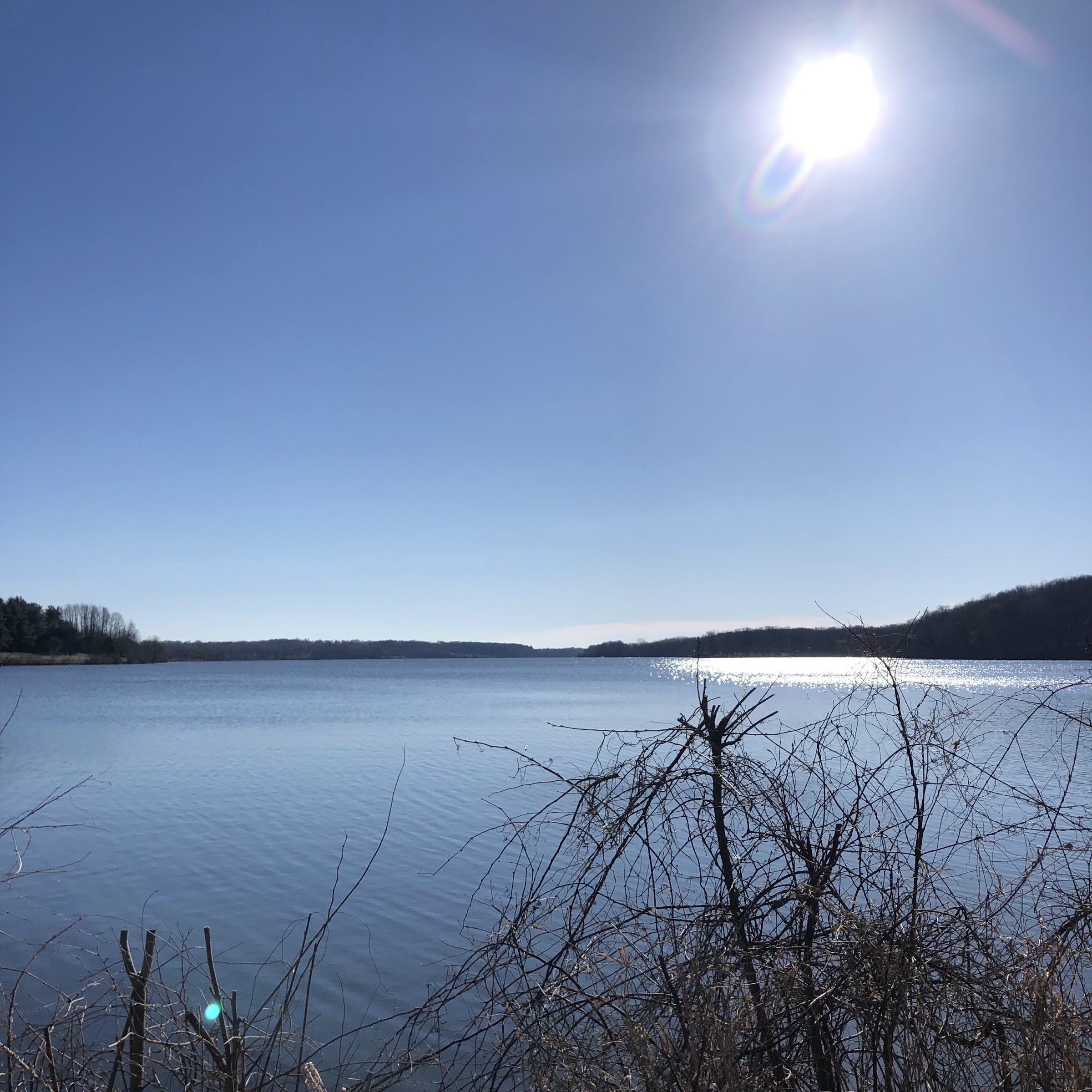 I came upon the first aid station, and with a pack, I really didn’t need much, but I grabbed a clementine while I thanked the volunteers and went on my way.

Next stop, the spillway. This is the unique feature of this course. Many runners are excited or nervous for this. The Lake actually drains into the Coralville Reservoir, by spillway. So to do a loop around the lake, you have to go through the spillway. Depending on the time of year or the amount of precipitation, the crossing can be an adventure.

On my approach, Rob caught back up with me. I also spotted Molly greeting us. It’s just so awesome to see friendly faces. Then standing in the spillway was my friend Michael. I think he lives for this volunteer position.

The spillway was moving. I stepped right up and splashed right in. The water was shin deep in spots and the rocks underneath were slippery. There was a guide rope across too. The water was cool, but it did feel good. Oh and yes, I just crossed in my running shoes and socks. I feel some, stopped and removed their shoes and socks…. to each their own I guess. 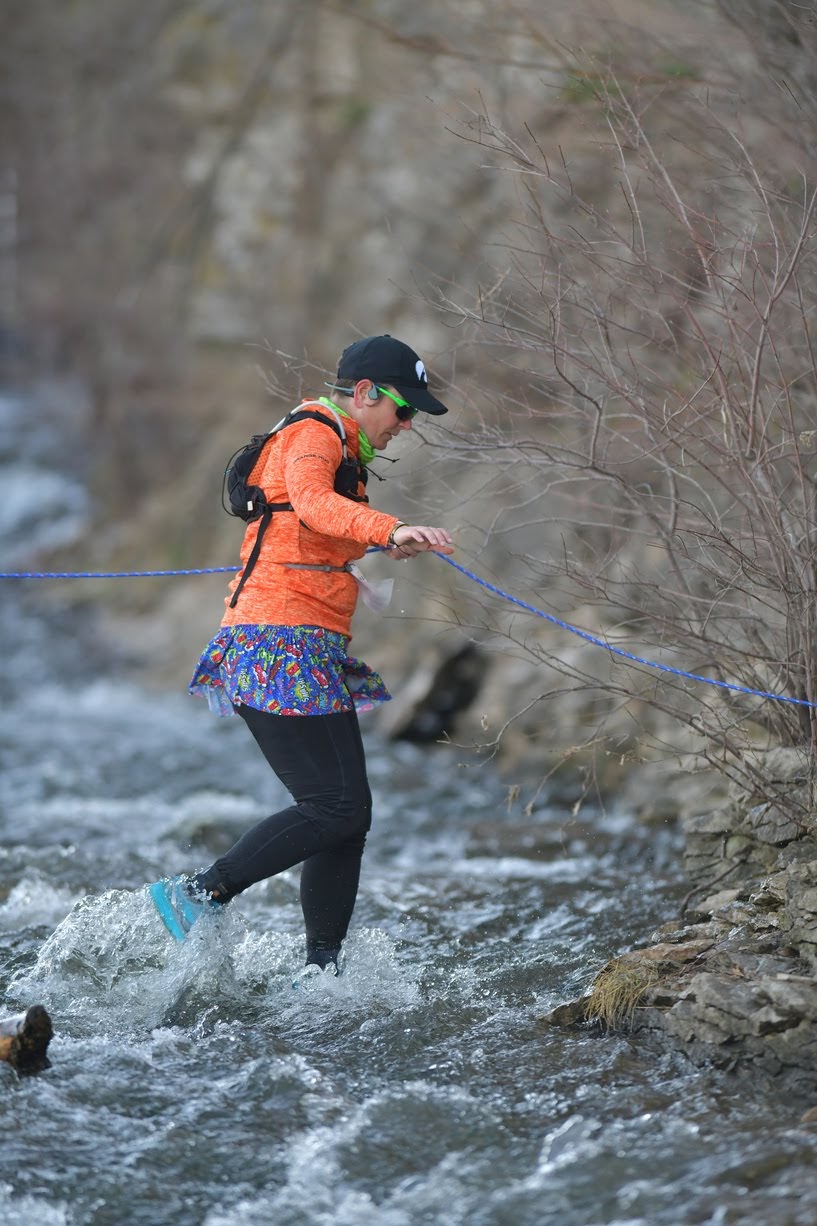 I think the most difficult part of the crossing is climbing out of the spillway. First you have to hang on the the edge and scale something called a goat cliff, then it’s a nice uphill climb to the top. However, if you stop and turnaround, there’s a pretty sweet view of your accomplishment. 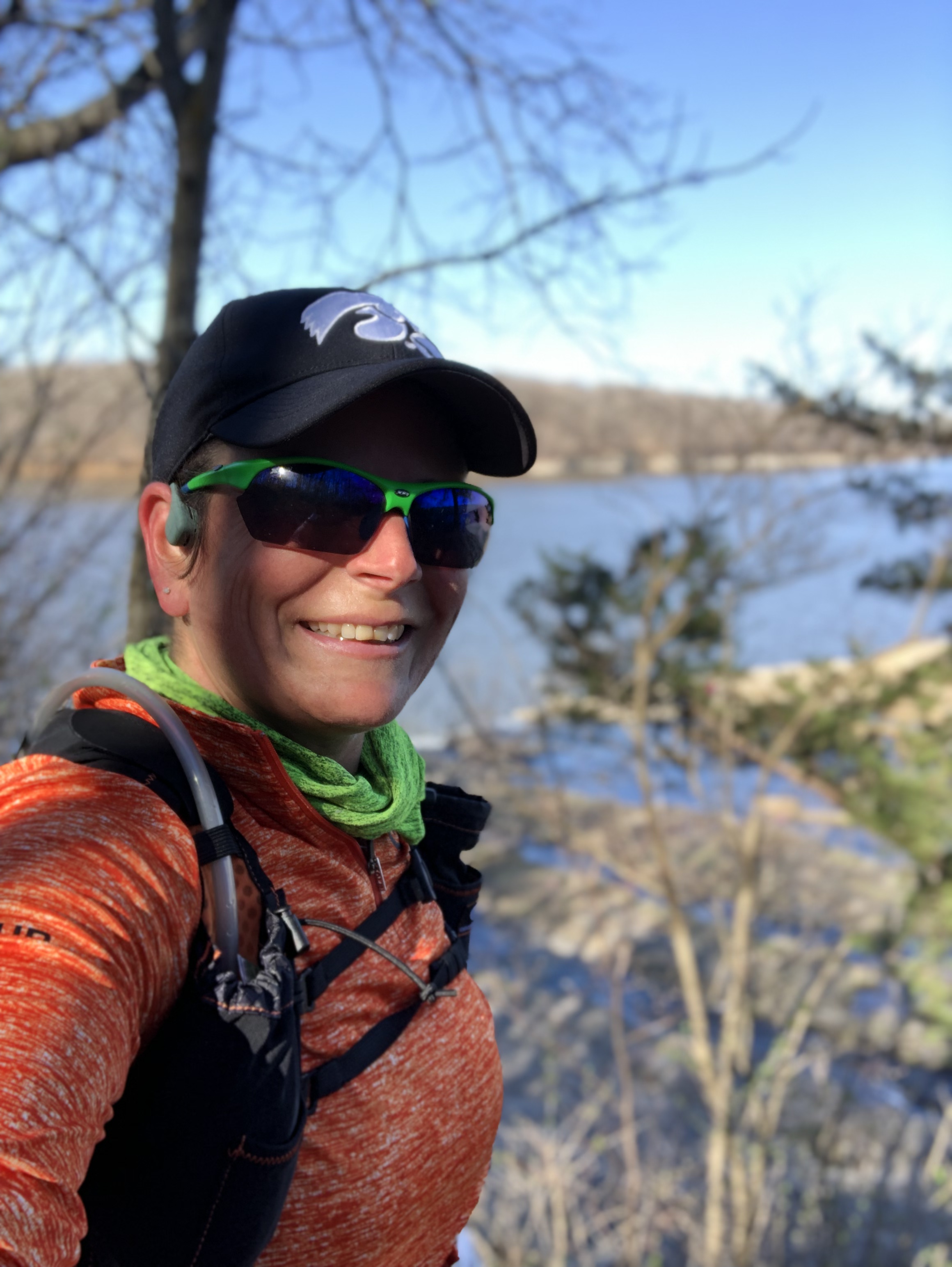 Now the more technical trail part…. or what Iowa has to to offer. This is the part that is covered with leaves and tree roots. It was also muddy and slippery in spots. I wasn’t going to chance anything, so I took my sweet ass time – walking.

This is when Lois caught up with me, she chatted and moved ahead with her friend. It was nice to see other people at this point, as it did feel like I was alone at times. However, the pink flags made the course easy to navigate to the next aid station, where I would see more friendly faces.

Also, this next aid station is cleverly called, confusion corner… Mark was there making sure everyone went the correct direction. He was also snapping photos, so I made it look like I was kicking ass and taking names! 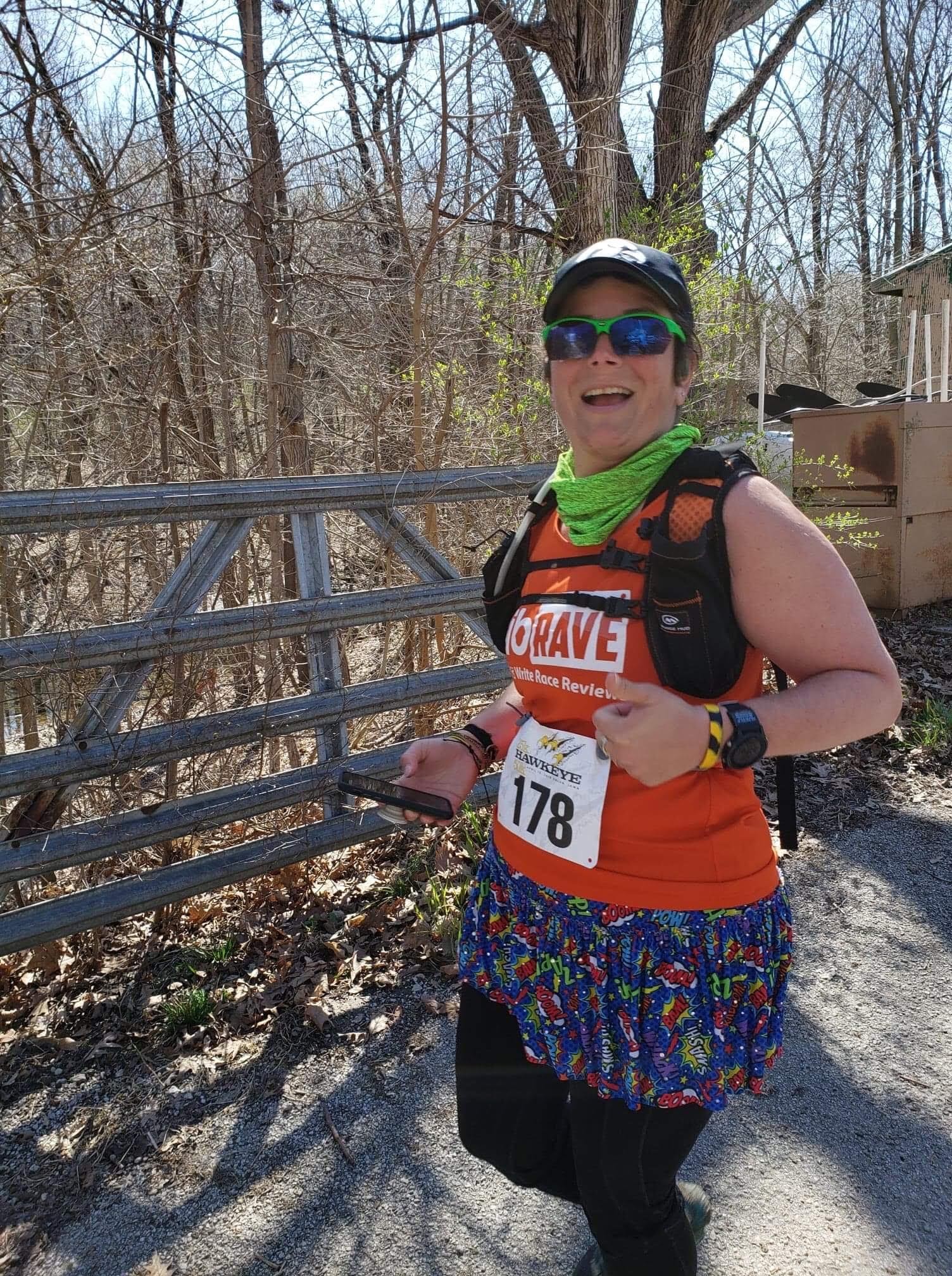 I browsed this aid station and grabbed one of those strawberry wafer cookies. I don’t recall the last time I had eaten one of those, but it was delicious! Then it was time to climb back up, and get back onto the trail.

There wasn’t much excitement, I did manage to run some of this, going back and forth with others as we all walked and ran. Even caught back up with Lois again, she wondered if I was going to the Brewery afterwards. 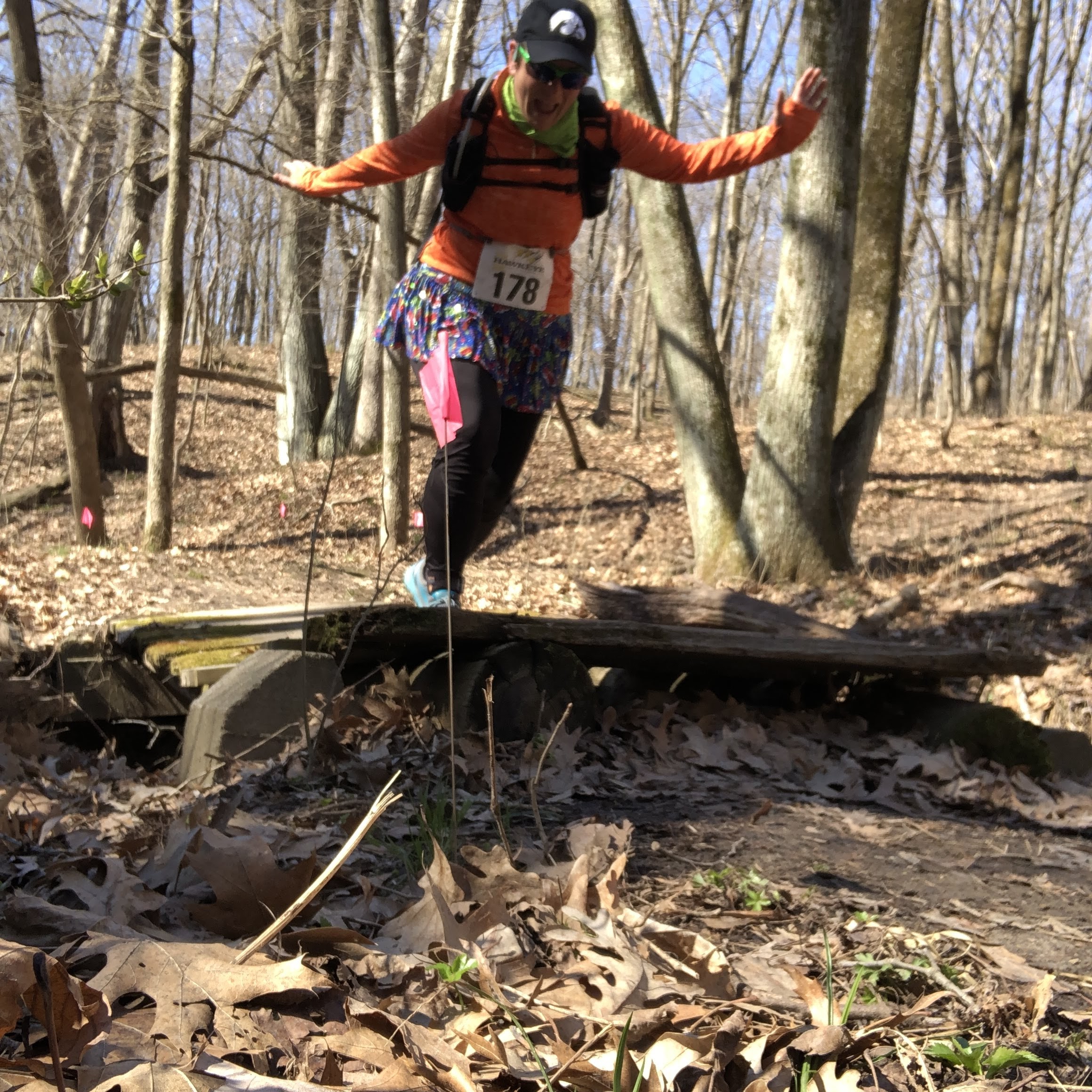 Then it was time for Hawk Ravine. You descend and then climb back out, probably one of the steeper areas. Also this area has the muddiest low spots… but I just traipsed right through them… when else can I enjoy walking through the mud?

Then out of no where, I was at the next aid station. There were all the things here too. They even had a bon fire going. However, I was at a point where I couldn’t decide if I was hot or cold…so for fun I took off my pullover. I poured a cup of water in my reusable cup, grabbed some pretzels and moved on. This is also when many people passed me… hmmm …well that’s no good.

I was back at confusion corner, where I spoke with Mark again, and Kara caught up with me. We walked and talked for quite a bit, through this trail section. When we were spit back out on the park road, we started running again. Then some how I just kept going. 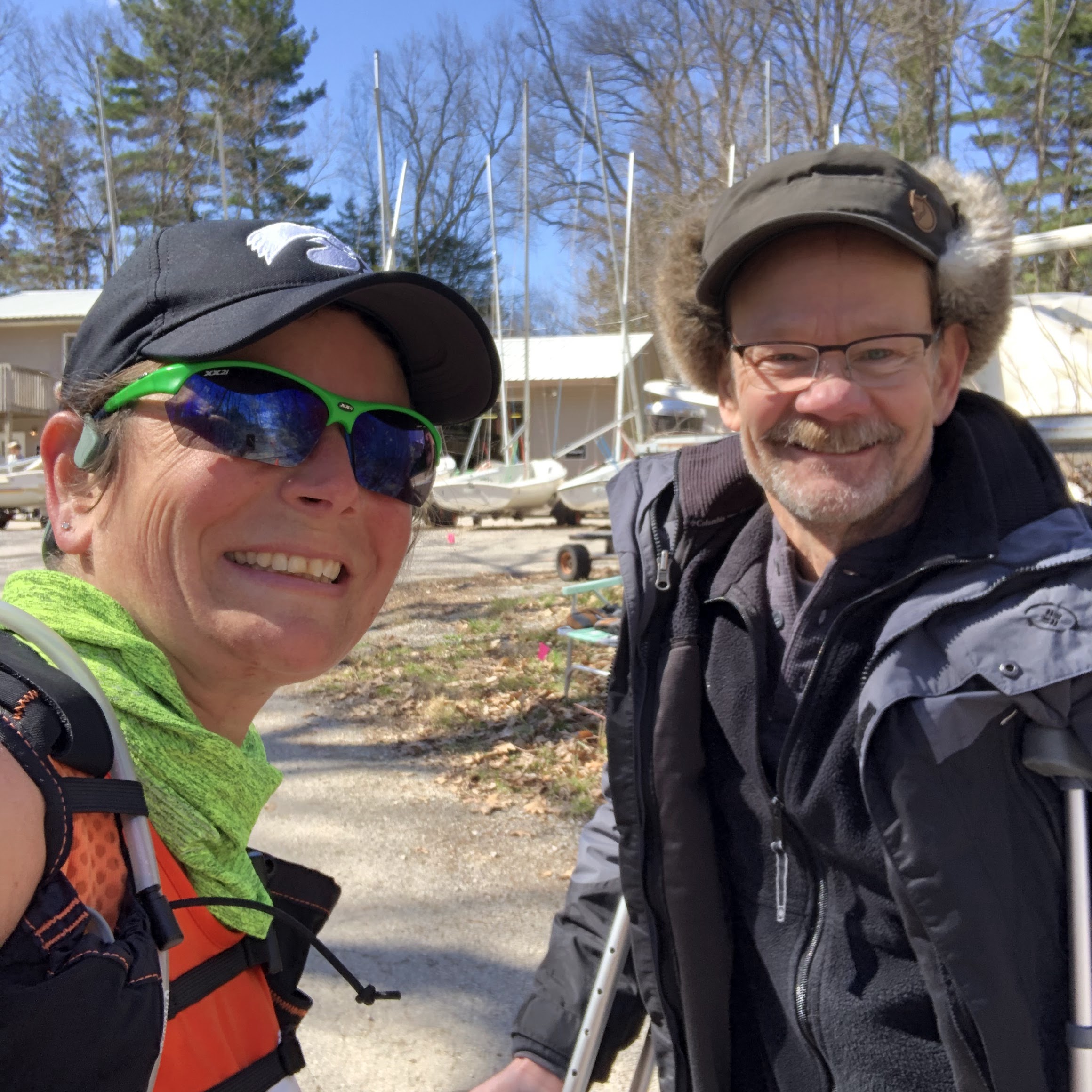 The rest of the race is all on road. While not the easiest section, I knew I could catch back up with those who passed me, so I kept moving.

I made the left turn on to Mehaffy Bridge Road, and then all I could see was the hill… UGH. I ran as far as I could and walked up the hill, even got passed by someone walking. I need to work on my walking pace.

When I got to the top of the hill, I started running again and didn’t stop. I had my sights on Kris up ahead…so the road back to the finish, I was chasing Kris, that was my goal!

*Also – Solon, stop littering, your road ditch is a mess!

I finally caught up with Kris on the next left turn… I wished her luck and kept moving. According to Strava I PR’d that road!

I was so close to the finish. The entire race it felt refreshing to only have to run one loop. To only run that highway section once… ahh that was nice!

The last stretch back to the Timber Dome, I did my best to finish strong. In that stretch my audiobook finished and I heard an ebay ca-ching as I had just made a sale. It was a good way to end a good race.

It felt good to cross a finish line again. My friends Ara and Cindy were there with the finisher medals. I stood at the finish and cheered in Kris and some others. She always gives me crap for passing by in my skirt, I hope it’s all in good fun.

I was given my race results… I finished in 3:36:48 ( I did have time to tackle another loop, but not today.)  I was getting a chill so I went inside to grab some grub. 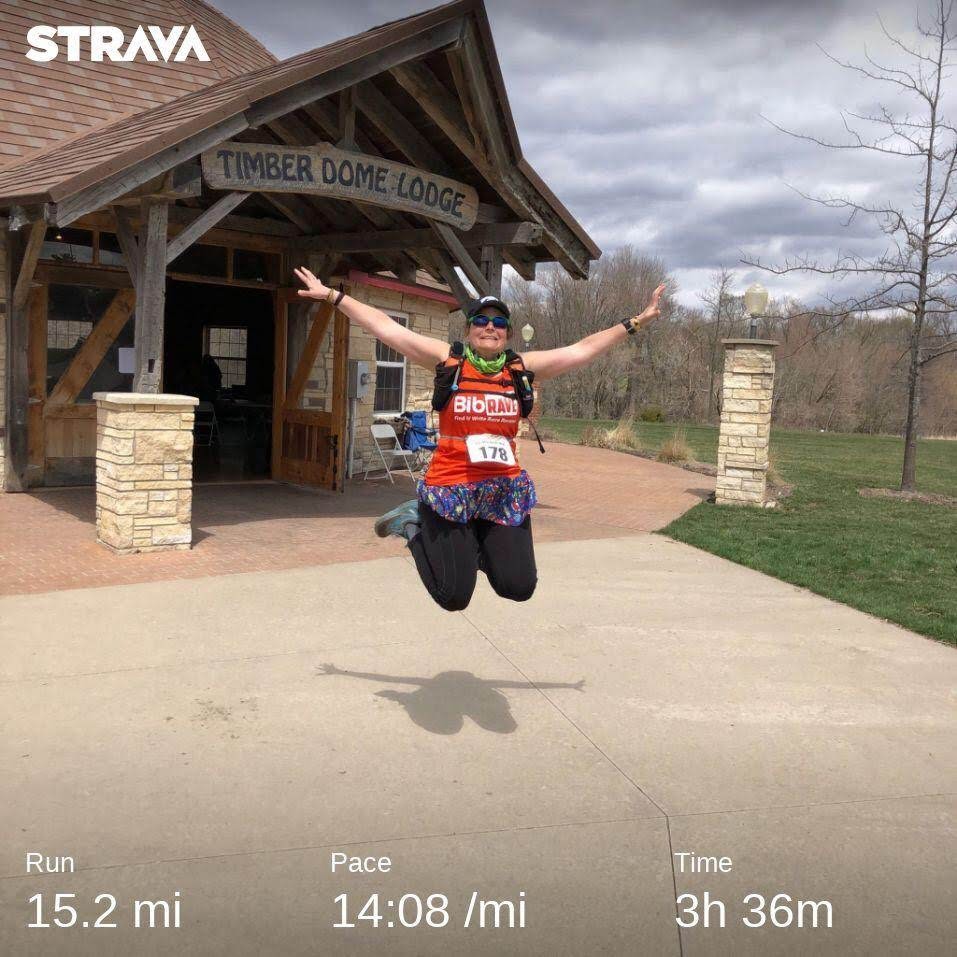 I filled a plate with some fruit, veggies, chips and dip and a krispie bar. I sat with Lois and her husband Tim. We chatted as others joined us.

Why do I go on about all these people and such….. I dare you to join your local running community and meet the people, then run a local race. You will find a great group of people!

Finally, I decided it was time to go…go to the Brewery. Tim and Lois joined me, and we ran into Kara and Sheryl. What a nice way for everyone to celebrate. 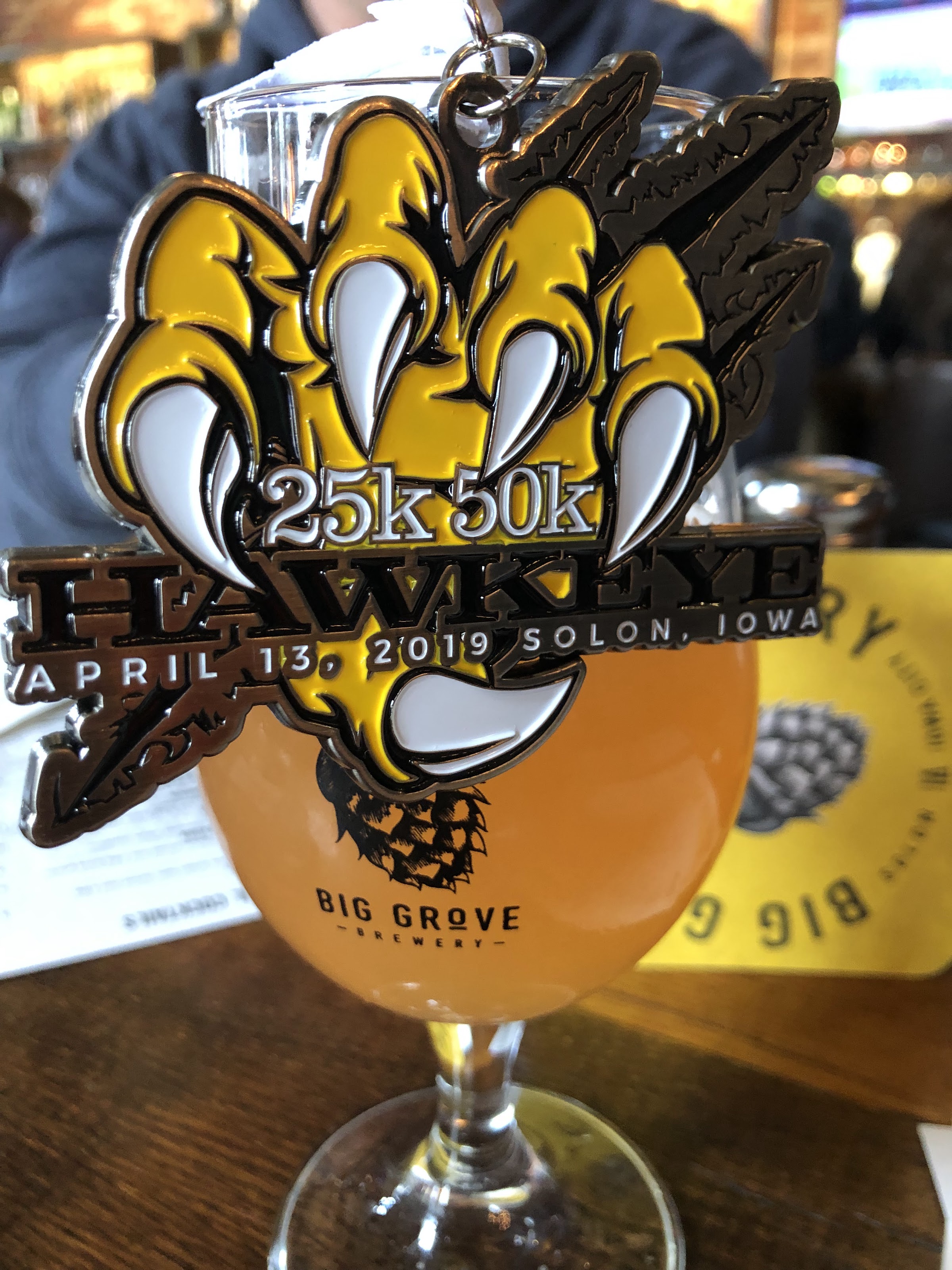 Congratulations to all who ran the Hawkeye 50k / 25k!

Thanks to Brian and Kris for organizing a great event with a local, community feel.

Also, I love the new Orange Mud Gear Vest pro, I will have more on that later! See you all at the next race… oh yeah, I signed up for the Illinois half marathon in 2 weeks!!

6 thoughts on “It’s Great To Be Back”