Back for more… I don’t even know how many years I have run this event, but it’s my favorite area race to brag about. This race is a pretty tough trail event on a day that is usually reserved for the family friendly turkey trot. Iowa City knows how to celebrate a runner’s true grit! 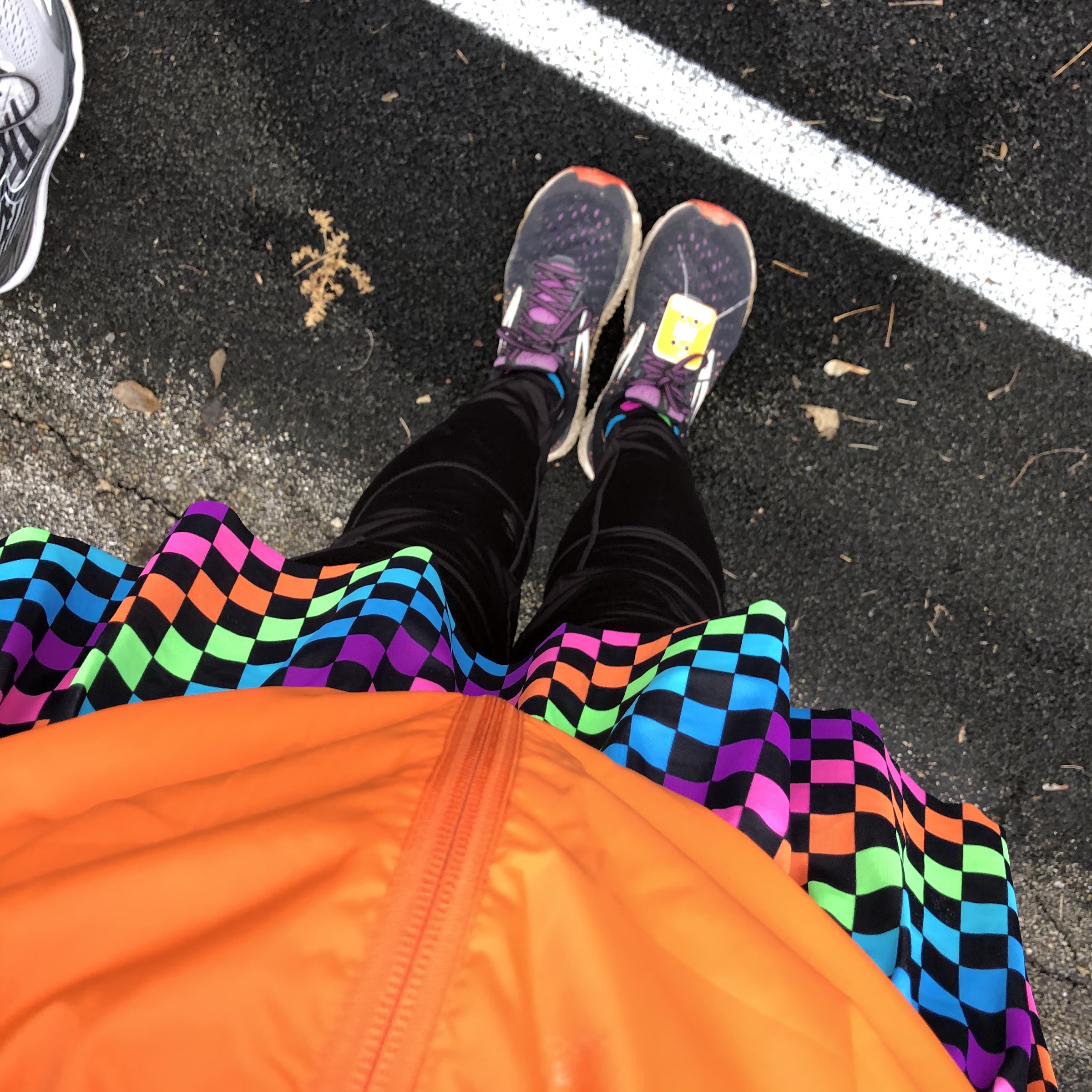 This year, Josh registered us ahead of time. I think it was around $25 and included was a long sleeve, soft cotton, unisex shirt and a timing chip.

I ran the 1.9 miles to the start. The race is hosted at an area High School. I met up with Josh who had gotten our shirts and timing chip. Again this year there were no bibs to worry about. In a day and age where banditing is becoming more of a thing, I feel I live in a small, honest community where it’s still not very common…so no bib, no problem.
We waited a while in the cafeteria and I was too hot, so with 10 minutes before the start, we went to the truck and waited 5 more minutes, then walked to the start at the track. 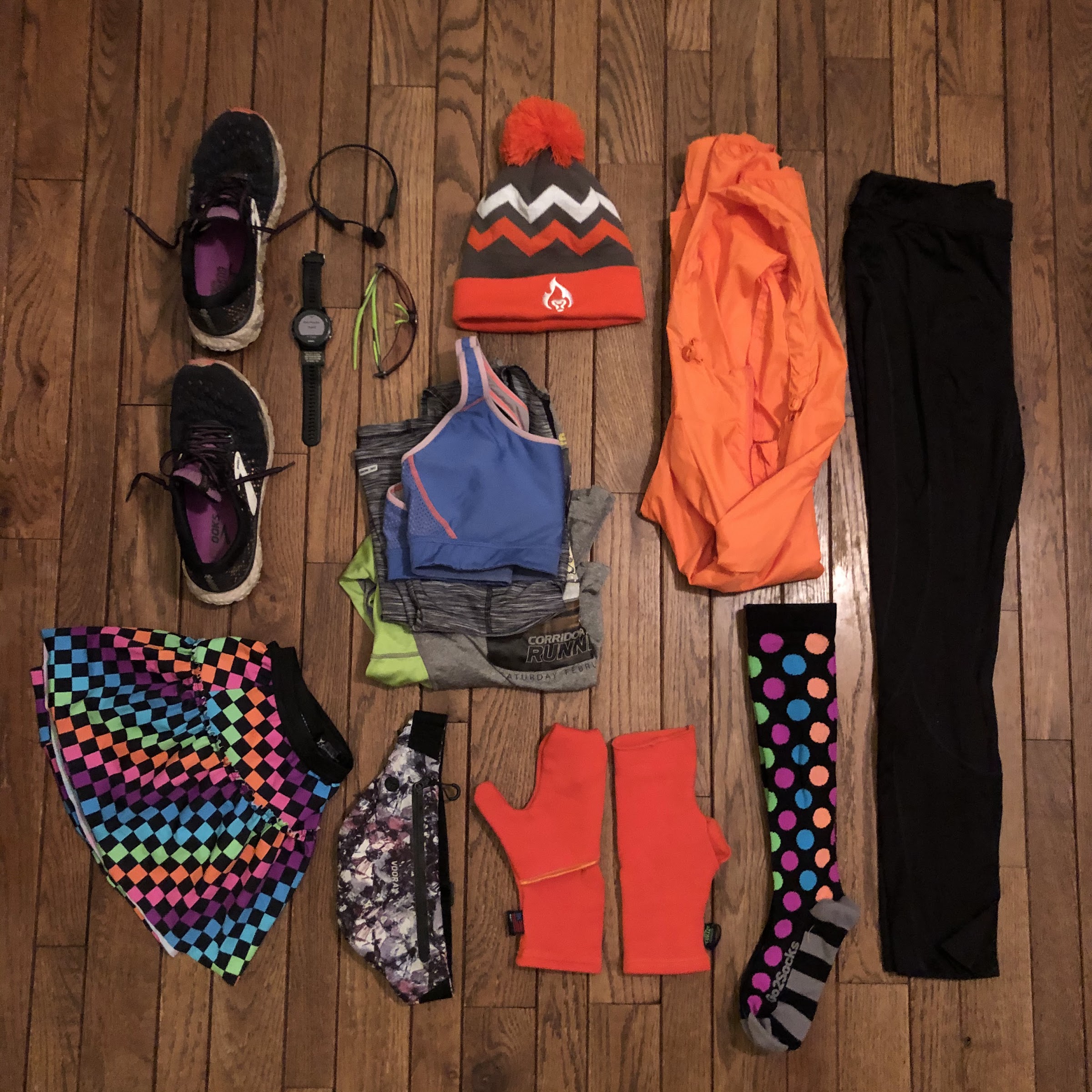 There always seem to be so many people gathered around on the wrong side of the track, but everyone eventually makes it to the starting line. There were announcements, but hard to hear. Then everyone was moving forward.

With a partial loop around the track we were off into Hickory Hill Park. The park offers some fun trails within city limits. I always have to ask a friend to run with me, when there’s not a race so I don’t get lost.

All those people make for a crowded first mile. Watching your footing and being patient will pay off. It’s easy to get excited, start passing people, then end up face planting because you missed a step or stumbled on a root.

The hills were all still there this year too and for fun they were nice and slimy. With my pace, by the time I hit many spots the trail was packed down and extra muddy. Some parts I just wallowed through the slop. It was funny to see people try to avoid it. 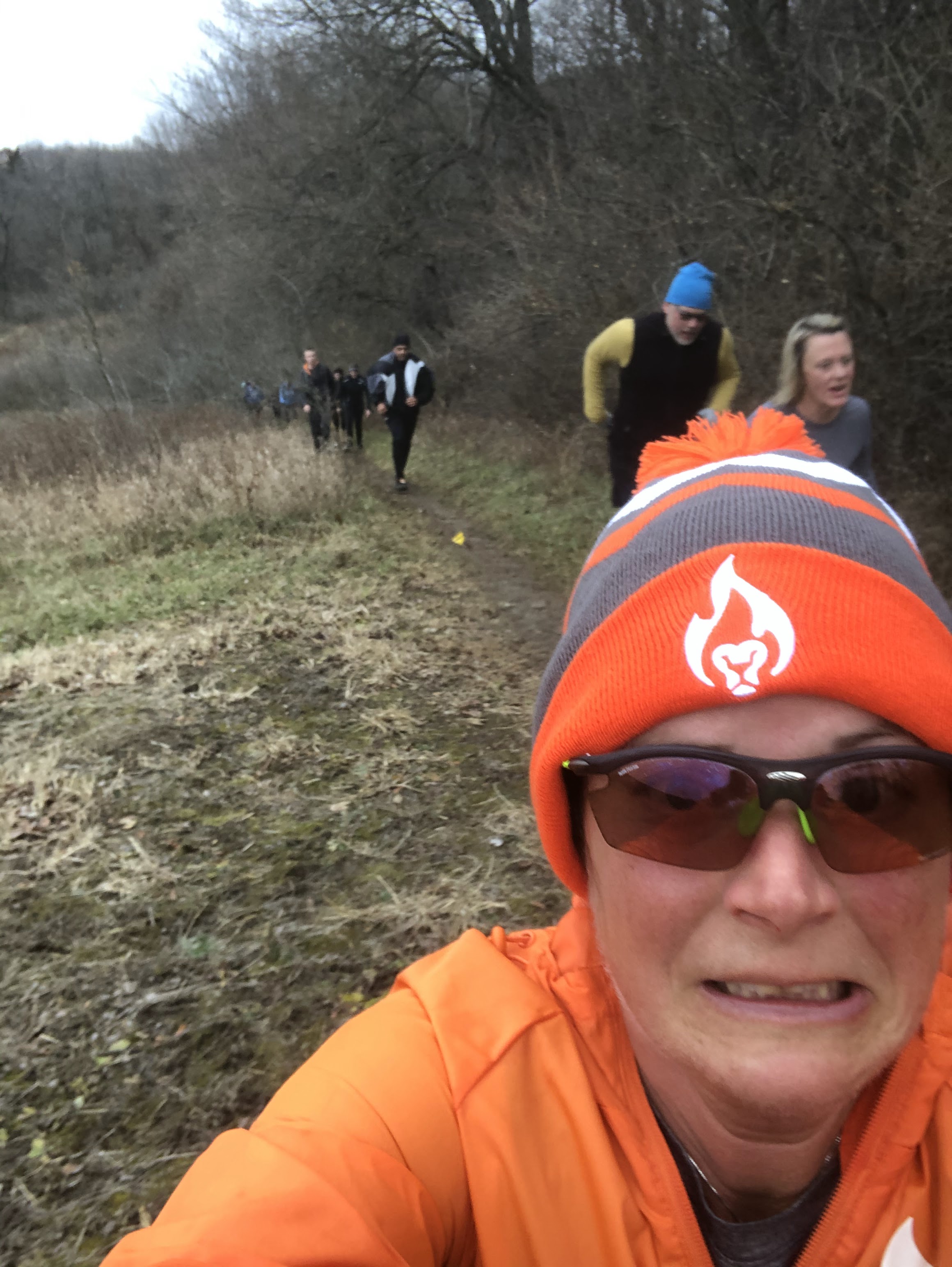 Speaking of avoiding… my favorite part of the race “the spicy way” is one of the most avoided parts of the event. So after trekking through the trails, close to the end there is a short cut, clearly marked with a sign. This year there were many questions, “what is the spicy way?” I think it’s because we couldn’t hear the announcements. So after explaining to someone it will be fun, I pulled off into the woods, following the yellow flags the spicy way. This was less of a trail, more like walking through tall grass, under limbs and over logs, then arriving at a small creek.

Once at the creek, you hear the usual grumblings from the people arriving. I think this year I heard “how are we going to get across?” I then climbed down the short bank, into the ankle deep water, and then proceeded to climb the slippery mud bank out. I happened to glance at the people using a log just down the way… meh, I like the challenge. Just splash into the creek and get it done.

Well I wasn’t done with the spicy way, as I still had to climb out of the ravine. I saw the guy ahead of me slip, but tried my best to use the existing roots for footing and was back onto a marked trail. Also as luck would have it, former NFL and Hawkeye kicker Nate Kaeding was at the top, lol.

Then it was time to climb the one last hill and run another partial loop around the track. I came to the finish line and pushed pause on my Garmin, I think I had a distance of 3.55 miles. Then I bent over and pulled my own chip from my shoe, and I suggested this method to others, but they insisted on waiting on the clippers to cut their own tags. (Pro tip, they just pull off!) 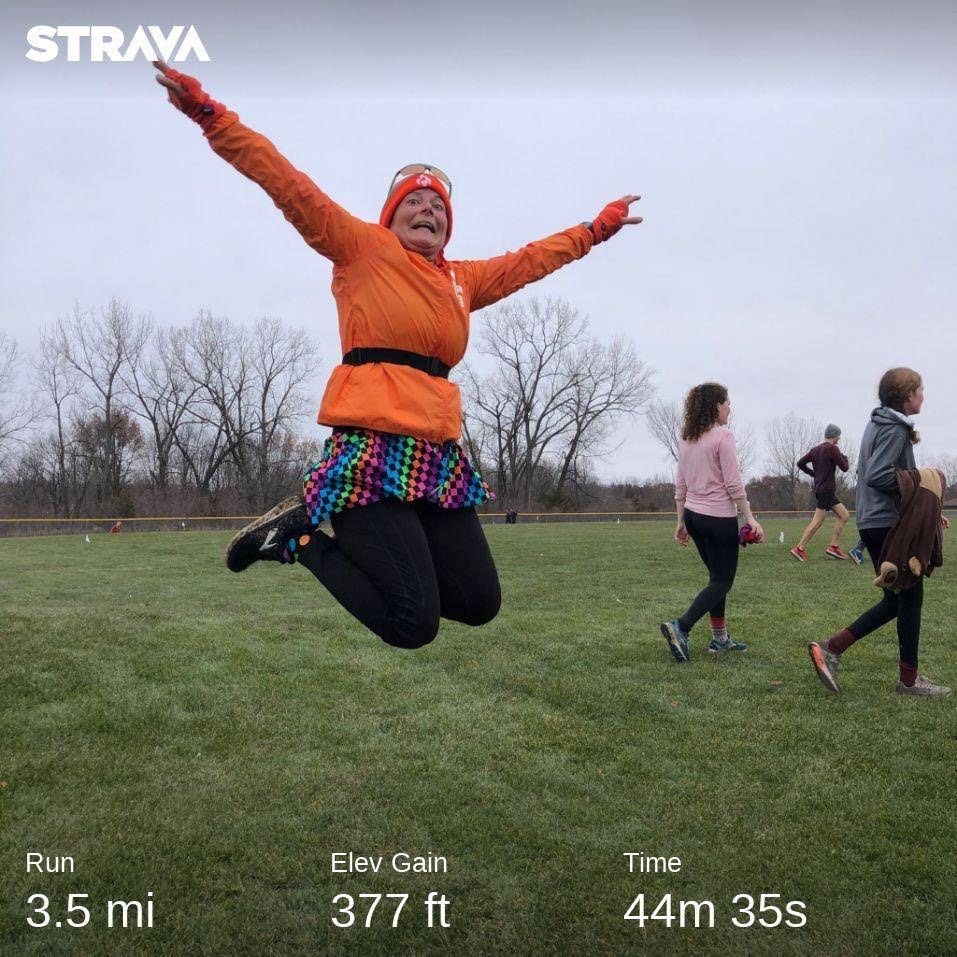 I met up with Josh and we walked back up to the high school. There was water in coolers and baked goods to enjoy. We didn’t stick around long. I believe winners were awarded pie.

I got a ride with Josh to get home. I was surprised he let me ride in his truck, I was super muddy. I like this race, it has changed a bit here and there over time, but it still remains to be a tough trail race on Thanksgiving. The price is right and it’s easy for me to get to. 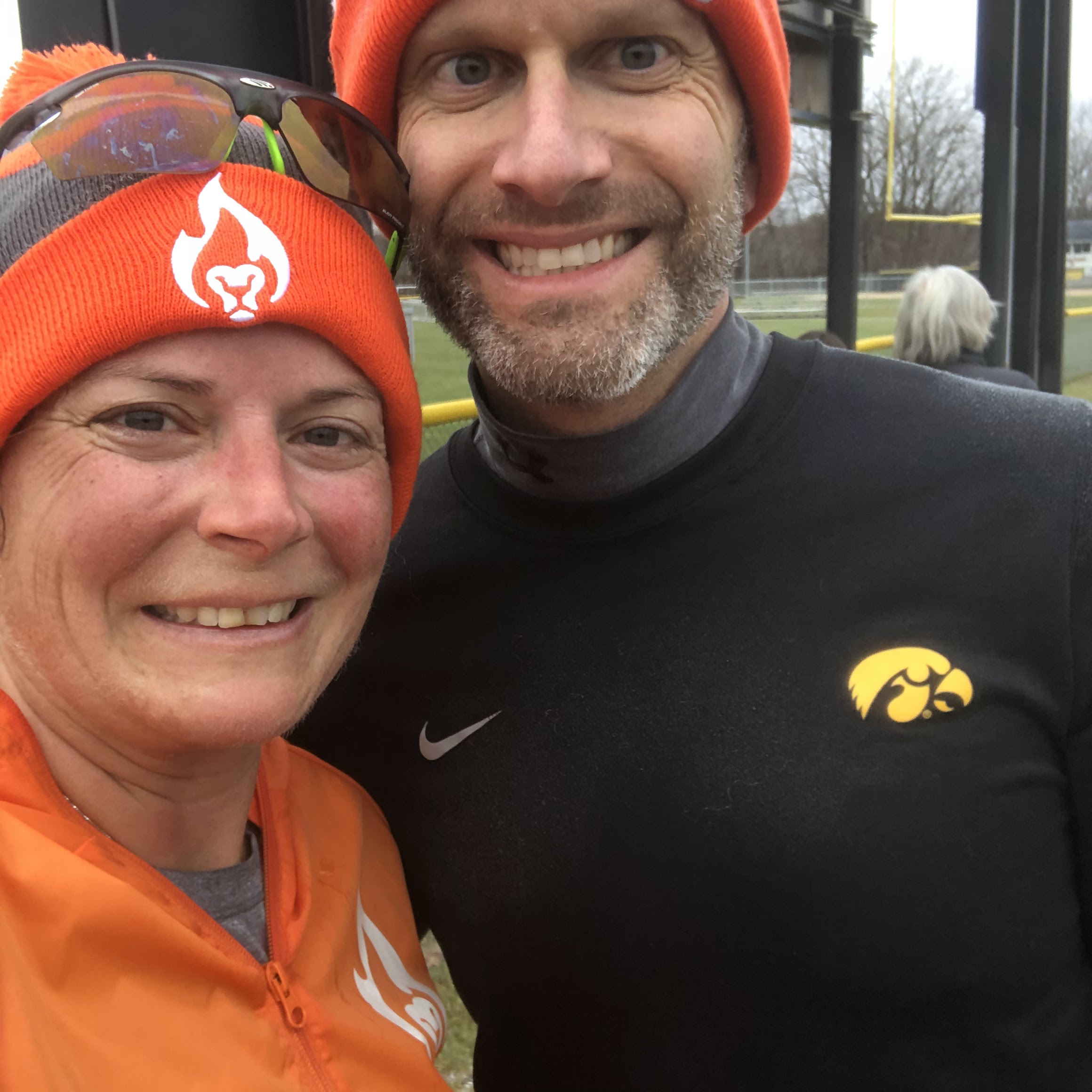